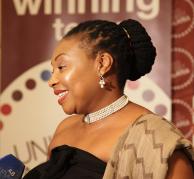 For renowned singer-songwriter and United Against Malaria champion Yvonne Chaka Chaka, one of the most powerful weapons in the fight against malaria is the human voice. In February 2013, the South African superstar performed her malaria anthem "Hearts on Fire" during the closing ceremony of the Africa Cup of Nations—the continent’s premier tournament—to raise awareness and support for ending malaria. As she urged Africans to unite against malaria, her message filled a stadium of 80,000 spectators (incredibly, eight times as many people die from malaria every year) and reached a television audience of nearly 700 million. Sales of the song on iTunes will benefit UAM and her own charity, the Princess of Africa Foundation.

An award-winning artist, Ms. Chaka Chaka has long used her voice to fight disease and social injustice. Beginning in 1981, she broke racial barriers in South Africa by becoming the first black child to appear on television. At age 19 as her sensational career as a pop musician took off, the world took notice. She too took notice of the world and its problems, particularly, malaria, which claimed the life of one of her band members in 2004. Shortly after, she became the first Goodwill Ambassador for the Roll Back Malaria Partnership—and she has since become UNICEF Goodwill Ambassador for Malaria in Africa, United Nations MDG Envoy for Africa, and Ambassador for the Nelson Mandela Children's Fund. In 2012 she became the first African woman to receive the World Economic Forum's Crystal Award, given each year to successful artists whose influence has had a positive impact on society.

“I believe in an Africa free of malaria, where children are healthy and can go to school and make their dreams come true, where parents are healthy and can work to provide for their families, where economies prosper because healthy people are being productive,” Ms. Chaka Chaka says. “I am committed to working towards ending malaria, a preventable and treatable disease, and I challenge every public and private sector leader to join me. United, we can beat malaria.”

Voices for a Malaria-Free Future is grateful to Yvonne Chaka Chaka for dedicating her powerful voice to improving lives and defeating malaria.

To purchase “Hearts on Fire” and support the fight against malaria:

To learn more about the causes Yvonne Chaka Chaka supports:

A Motherland Tour - A Journey of African Women: a documentary film starring Yvonne Chaka Chaka, who toured Africa to meet and celebrate women fighting to end HIV/AIDS, TB and malaria.

Why We Need to Back the Global Fund Now: a Huffington Post opinion piece by Yvonne Chaka Chaka, who calls on African leaders to invest in health

Africa's Healthcare is at a Critical Crossroads: a World Economic Forum blog piece by Yvonne Chaka Chaka, who calls on Africa's business leaders to invest in the Global Fund